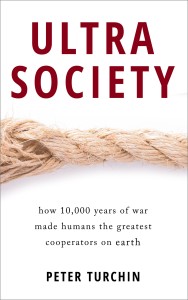 Ultrasociety is a book about the processes by which humans became the most social animals on Earth. Over the past ten thousand years, the complexity of the societies we live in has grown exponentially, from hundreds of people to hundreds of millions. While many theories have arisen over the years to explain this process, such as the rise of agriculture or the desire to conquer, none have been rigorously tested. Drawing from the fields of cultural evolution and the new science of cliodynamics, Turchin makes the case that the growth of social complexity has been driven by warfare. The societies which have been able to mobilise the largest armies have succeeded, and those societies are the ones which have developed the most complex forms of social organisation. Their opponents, who lacked the complex social structures, and thus the large armies, have dwindled into the lone and level sands.

ALIGNED is mentioned in the book’s acknowledgments, as are project technical lead Dr. Kevin Feeney and ALIGNED principal investigators Prof. Harvey Whitehouse and Dr. Pieter Francois. ALIGNED has been working on the systems that will underpin the Seshat Global History Databank, which will allow researchers to expand upon the ideas discussed in Ultrasociety.

ALIGNED’s focus on establishing high quality data sets is an important part of empirically testing theories of social and cultural complexity. A significant portion of any social scientist’s time is spent merely locating and cleaning useful data, from the vast amounts available. Data must then be transformed into a form which can be more easily analysed. With the Dacura Data Curation Platform for Seshat, this is a task which ALIGNED will make faster and easier, freeing social scientists to spend more time developing and testing theories.

Those involved in the Seshat Global History Databank have already made interesting and valuable contributions to the understanding of how human social complexity developed. The new tools and processes which ALIGNED is developing with them will allow them to explore new ideas and theories, deepening our knowledge of where human societies came from and where we will go from here.
To see the ALIGNED tools deployed in Seshat view our Seshat demo video.